Can't find what you're looking for? Contact us
Home
Blog
A Closer Peek at PEEK – HPP explained (part 2)

24 September 2019
John Grasmeder
Chief Scientist
Share
Throughout the plastics industry, PEEK is widely viewed as a leading high-performance polymer (HPP). However, the materials of choice in the automotive, aerospace, oil & gas and medical device industries have long been metals. PEEK polymer is fast changing that mind-set.

So what is PEEK?

PEEK or polyetheretherketone, belongs to a family of polymers called "aromatic polyketones" (more accurately "polyaryletherketones" or PAEKs). That means it's built up from the following building blocks:

R&D into PAEKs has its origins in the 1960’s but it wasn’t until 1978 that ICI (Imperial Chemical Industries) filed their patent on PEEK which was first commercialised as Victrex PEEK polymer in 1981.

"Aromatic", usually meaning distinctive or sweet-smelling, may seem a strange word here, but scientists use it to describe some molecules containing or made from ring-like structures (like the aryl building block above).  Small molecules of this type, like toluene & naphthalene, have distinct odours, hence the name.  PEEK itself however – like most thermoplastics – is odourless under normal conditions. From a chemical point of view, PEEK is a largely linear, semi-crystalline polymer.  Here’s how the building blocks fit together and thus we get Ether Ether Ketone or EEK:

This “repeat unit”, shown in the square brackets above, is replicated many times – on average somewhere between 200-300 times – to make a single PEEK polymer chain.  The P comes from the Greek “poly” meaning many, so many EEKs make PEEK.  The aryl and ketone groups are fairly rigid and provide stiffness which means good mechanical performance combined with a high melting point.  The ether groups provide some degree of flexibility, for toughness, and like the aryl and ketone groups are unreactive, so providing resistance to chemical attack.  The regular structure of the repeat unit means that PEEK molecules can partially crystallise, and crystallinity provides a combination of wear, creep, fatigue and chemical resistance – more on this later.

The resulting polymer is widely regarded as one of the highest performing thermoplastics in the world. Compared to metals, PEEK-based materials are very light weight, easily shaped, resistant to corrosion and can have considerably higher specific strength (strength per unit weight).

Designing to the needs of the application

When we make PEEK, we use a process which controls the length of the chains, or molecular weight.  PEEK with longer chains (high molecular weight or MW) tends to be tougher and more impact-resistant than PEEK with short chains.  However, high MW polymers are very viscous when molten which can limit their ability to fill small moulds.  Low MW PEEK is less impact-resistant but flows much better in the melt so can make small intricate parts easily.

A set of attractive properties

PEEK does not offer merely two or three properties that mark it as the polymer of choice when high performance is required; it has a whole variety of them. They include:


As a thermoplastic PEEK can be processed using conventional thermoplastic processing equipment for injection and compression moulding as well as extrusion. It is very versatile and increasingly used for improved part performance, durability, weight saving and overall reduced lifetime system cost.  No wonder it’s replacing metals and alloys!

Across many industries and critical environments, material experts, part designers and purchasers have to decide whether PEEK is the material of choice to enable advances in performance, weight reduction, energy consumption, assembly time, cost savings or stick to traditional metals and alloys. 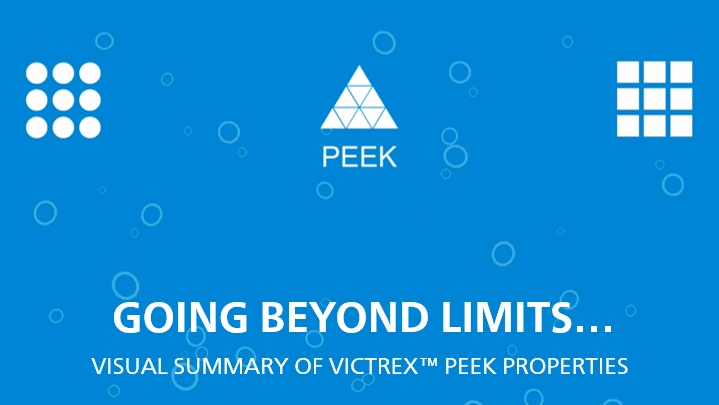