Can't find what you're looking for? Contact us
Home
Blog
Heavy metal for heavy use? High-performance polymer challenges metal heads 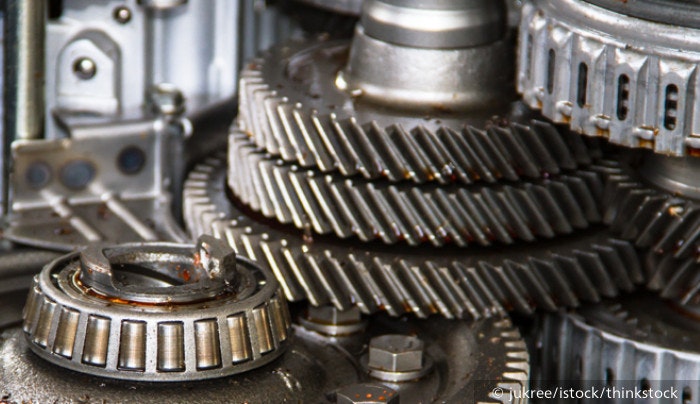 Polymers have made a real difference to a manufacturer’s ability to make a range of parts for every conceivable contraption known to human kind. They have enabled designers to push the boundaries of design capabilities whilst still producing parts that are functional and affordable.

It is fair to say that before polymers were discovered, the material that enabled manufacturers to make numerous types of components was metal. Like polymers, a range of metals are available but to move from the raw material to the final component requires multistage processes. Along the way, unlike polymers, a lot of the starting material does not end up in the final part. In aerospace this is known as the buy-to-fly ratio, the weight ratio between the raw material used for a component and the weight of the component itself, with most metal alloys, like Aluminium and Titanium, having high buy-to-fly ratios because of the numerous primary and secondary processes required to produce the final components. However, despite aluminium being infinitely recyclable, the less efficient manufacturing process means the majority of raw material you purchase ends up being recycled.

According to Geyer, Jambeck and Law in 2015 over 400 million metric tonnes of polymer were produced. In contrast, the global demand for the typical metals that high-performance polymers (HPP) can replace (mainly aluminium, steel, titanium, cobalt, brass and bronze), based on latest statistics from the relevant metal associations was around 4X the total polymer consumption for the same time period. Thus, there is a wide range of applications and industries where polymers, such as PEEK, can be deployed, and today roughly 20% of those replacement opportunities have been taken. So for the foreseen future there are plenty of opportunities to continue to accelerate the replacement of metal parts.

In general polymers can be segmented by performance characteristics and operating temperature range into commodity polymers (by far the largest segment by volume), engineering polymers, and high-performance polymers (HPP), which as the name suggests are polymers that have superior performance. VICTREX™ PEEK for example belongs to this latter category and sits at the top of it.  It is a thermoplastic material and can be melted and reformed into a new shape without affecting its mechanical performance. PEEK (PolyEtherEtherKetone) polymers are a member of the PolyArylEtherKetone or short PAEK family of polymers and increasingly recognised as a dynamic driver for efficient applications.

General production of high-performance polymers is estimated to be around 0.7 million metric tonnes and of that PAEK is circa 6,000 tonnes.  This is a drop in the ocean in terms of total polymer output but nevertheless PEEK is challenging metal as the material of choice especially in applications where components have to contend with high

temperatures and high pressures in a corrosive environment. 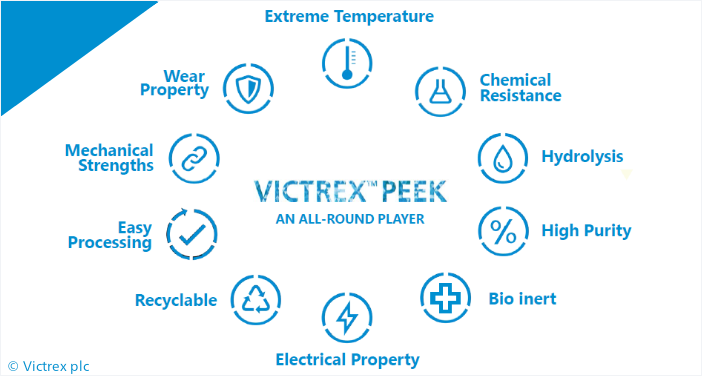 There are numerous reasons why you should choose a polymer, particularly a high-performance polymer like VICTREX™ PEEK, over metal, the outstanding ones are:

Weight Reduction: PEEK parts are noticeably lighter than their metal alternatives because of their excellent strength-to-weight ratio. For the same stiffness a PEEK part can be up to 70% lighter than an equivalent steel part.  This weight saving means that manufacturers in the transportation industry, for instance, can produce lighter vehicles or planes and this helps to enable compliance with strict environmental regulations governing CO2 emissions and fuel economy.

Cost savings: While metal may be lower in raw material cost, the manufacturing process can be time consuming and complex and often requires multiple processing stages. Using HPP such as VICTREX PEEK allows a one-step injection moulding process, resulting in lower component cost but also positively impacting energy and labour cost and reducing the amount of scrap 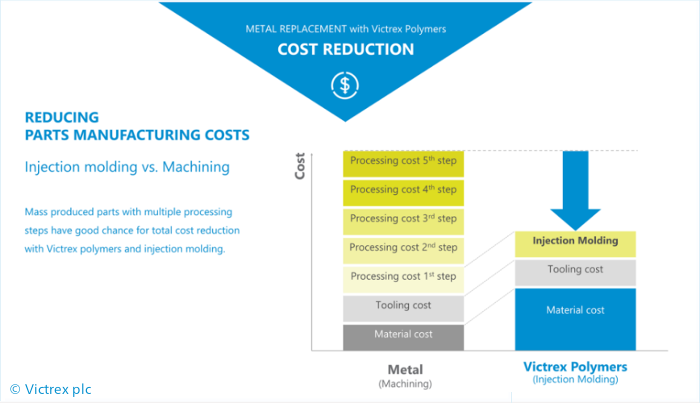 Design Freedom: The flexible nature of the polymer and the relatively easy manufacture, by injection molding or extrusion, allows designers to explore new ways of making parts, especially when making them smaller, or more intricate or more powerful. This flexibility and creativity will only increase as disruptive 3-D manufacturing technology, also known as Additive Manufacturing, becomes established.

Longer Lifetime: Because of the nature of polymers and the ability to add fillers to enhance certain properties the final component can not only outperform the metal alternative it can have a longer lifetime. High-performing PEEK polymer resists a wide range of chemicals at up to 200°C. It also has inherent tribological properties including high wear resistance and a low coefficient of friction which also contribute to extended product lifetimes and longer maintenance cycles.

You don’t have to take my word for it; here are a few examples of how replacing a metal component with a Victrex™ PEEK component can make a difference

The key to identifying opportunities for replacing metals is to ask the right questions. The great scientist Albert Einstein understood this, commenting “If I had an hour to solve a problem and my life depended on the solution, I would spend the first 55 minutes determining the proper question to ask. For once I knew the proper question, I could solve the problem in less than five minutes”.  By asking the right questions you uncover unmet needs and in many cases, whenever a metal part cannot provide a solution to a challenging problem, VICTREX PEEK can be the answer.