29 August 2017
Dr. Geoff Small
Market Technology Manager
Share
Assessing the lifetime of the materials used in Thermoplastic Composite Pipes in aggressive service environments is complex. The current status of methods which may be used and what ‘best practice’ might look like are considered in this blog.

Understanding and prediction of thermoplastic polymer performance in an Oil and Gas production environment continues to be a subject of significant interest: NORSOK* and ISO testing are frequently referred to by polymer suppliers and users alike and go some way toward a common methodology for comparing the performance of different polymers. However, there are many potential pitfalls to be encountered in the interpretation of the data from these tests and occasionally in the manner in which they are undertaken – not least being the duration of the test.

In comparison to evaluation of chemical resistance of polymers, i.e. the impact of chemical and physical interaction, there are far fewer standards which deal with this aspect in composite materials and even less directly covering the Oil and Gas Industry. An ISO committee is currently working on this very area under the auspices of ISO 23936-4.

Where thermoplastic polymers are combined with continuous reinforcing fibres such as glass, carbon or aramid, an added level of complexity is introduced.

The degradation of polymer matrix composites in hostile environments may be sub-divided into a number of areas:

It is very unlikely that only one of the above mechanisms will occur in isolation: in practice, degradation is a complex combination of a number of these factors and in addition may be affected by applied load or strain.

Degradation of the polymer matrix

Chemical resistance testing of polymers for use in an Oil and Gas environment would typically involve immersing samples in the chosen chemical for long periods at or above service temperatures. Samples are removed at intervals in order to build upa picture of the progression of property changes over time.  Upon removal of the test pieces from the test vessel, they are inspected, weighed and measured and then subject to mechanical property tests.

Assuming that only one degradation process is occurring at any time, the Arrhenius relationship, a formula for the temperature dependence of reaction rates, may be applied to chemical resistance testing, provided that one does not attempt to extrapolate results through the glass transition temperature of the material.  Thus, raising the test temperature by 10°C cuts the testing time in half.  For example, testing VICTREX™ PEEK in methanol at 80°C for 1 week is the equivalent of testing the same at 20°C for about 1 year.

This type of approach forms the basis of the testing described in NORSOK M710 Edition 3 and ISO 23936-1 although appropriate care is needed in selecting the most appropriate property for evaluation and ensuring that the pre-conditioning and test durations are appropriate for the polymer concerned. It should be noted here that the use of degradation data to predict a materials lifetime using an Arrhenius approach is only viable if there is a single degradation mechanism in progress and this may not always be the case.

Thermal degradation of thermoplastic polymers is however more readily understood and tends to follow an Arrhenius type relationshipreasonably well. The approach for evaluating lifetime of polymers from thermal ageing alone is well documented and detailed in ISO 2578: Plastics-Determination of time-temperature limits after prolonged exposure to heat.

Degradation of the fibre reinforcement

Carbon fibres are generally considered to be stable in most chemical environments and at elevated temperatures. In carbon fibre reinforced composites therefore, ageing and degradation is centred on the polymer matrix and the interface with the fibre. The bonding of PEEK polymer to carbon fibres can be particularly strong.

Glass fibres are generally accepted to lose strength even when left, unloaded in an ambient environment. Immersion in water can lead to significant loss of strength in E-glass fibre over fairly short periods of time and this has been attributed to leaching of sodium and potassium oxides from the fibre which produces micro cracks. This effect may be further accelerated when the composite is under load. There are several glass fibre types which may now be selected from and certain of these (such as those with higher alkali ion content) may be more resistant to degradation from water. Although drying out of a composite structure will lead to most of the moisture being removed, the damage to the glass fibres is permanent.

Aramids fibres may not bond as readily with polymer matrices making them more susceptible to ingress of chemicals (gases and liquids) along the fibre / matrix interface. Aramid fibres have fairly good resistance to chemical and thermal degradation but they can degrade slowly when exposed to ultraviolet light. These fibres are typically limited to around 150°C for long term use and thermal damage is non-reversible.

Degradation of the fibre / matrix interface

The quality of the bond between the fibre and matrix is important in the ability of the matrix to transfer the load to the fibres (which are higher strength and higher modulus). The fibres themselves will then bear a higher proportion of the applied load.  If the interface between fibre and matrix deteriorates then more load is taken by the matrix polymer which leads to progressive reduction of the composite performance.

Poor fibre-matrix adhesion is characterized by ‘clean’ fibres which have been pulled out of the matrix: 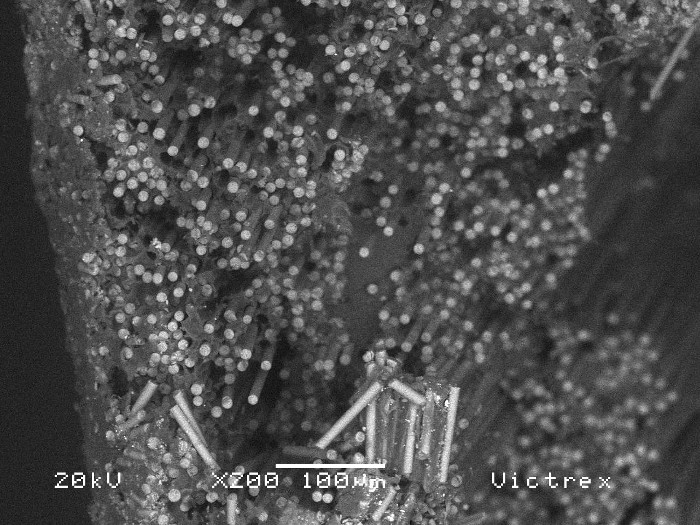 The interface is typically strengthened and protected by the use of surface treatments to the fibres called ‘sizing’. Not only do these surface treatments protect the fibres during transportation and manufacture of the composite itself but they may also promote good adhesion between the fibre and the polymer matrix.

Selection of a highly chemically resistant matrix material, such as VICTREX™ PEEK polymer in the case of Magma´s m-pipe, further reduces the risk to the interface region as the polymer has very low equilibrium moisture uptake over a wide temperature range.

Degradation of the interface between adjacent lamina

Composite structures are made up of a number of thin laminae which are processed together to form thicker and structurally strong materials. Within each lamina are the fibres and matrix polymer discussed above and in a similar way to the transfer of load between fibre and matrix, there must also be effective load transfer between adjacent laminae. This can only be done where the quality of the interface between laminae is sound. The quality of this interface is generally a function of the manufacturing process. Degradation of these interlaminar bonds would typically be seen as a reduction in Inter Laminar Shear Strength ILSS.

Piecing these various elements together to provide a lifetime assessment is a complex task and no single proven method of doing so yet exists. The addition of stress, static or dynamic adds a further dimension. Various methods have been proposed for predicting lifetime from short term data, such as the use of Arrhenius for thermal ageing and a reasonable correlation has been found with a wide range of materials. Similar approaches covering the degradation of the polymer matrix hold promise but test and measurement methods are frequently polymer specific and a singular approach is frequently inappropriate.

For composite materials such models will need to include time dependent factors which model, for example, the permeation of fluids through the matrix and at the interface between fibre and matrix, in addition to the degradation of the fibres and matrix themselves. In the short term therefore modelling will only form part of the answer and indicate trends which may be expected. There is currently no real alternative to test and evaluation of the composite material in the environments in question.

Following the joint development of the Magma carbon composite m-pipe® utilising VICTREX™ PEEK, Victrex recently invested in a minority interest in Magma to further facilitate the adoption of its m-pipe® for subsea applications.

Having studied Materials Science at the University of Bath and obtaining his PhD on the subject of Cellular Composite Structures, Dr. Small has worked in the polymer industry for 23 years. Prior to joining Victrex he worked for The National Physical Laboratory (UK) and for Phillips Petroleum Company in a market development role for engineering polymers.