20 August 2019
John Grasmeder
Chief Scientist
Share
The widespread use of polymers has revolutionised our lives in the last 75 years or so. There is a wide range from every-day commodity plastics up to high-performance polymers (HPP), such as VICTREX™ PEEK, that are able to perform in very demanding durable applications.

Centuries ago, the Greeks could not have known that their word “polymeres”, meaning “having many parts”, would today serve as the name for a whole class of materials. A polymer can be defined as a substance which has a molecular structure built up from a large number of similar units (called monomers) bonded together.

Let’s not forget that Nature invented polymers first – proteins, carbohydrates, your hair, fingernails, even your DNA is a polymer. Man-made polymers came along much later but today are ubiquitous and play an essential role in modern life.

There are currently about 300 million tonnes of polymers made annually, representing ~6% of oil and gas consumption globally. They fall into two broad categories – thermosets and thermoplastics. Thermosets are polymers which typically start as viscous liquids which when subjected to heat or pressure harden to form a solid which cannot be melted again. Araldite® glue is an example. Thermoplastics, the subject of this article, soften and melt to be shaped when heated and then harden once cooled. They can be remelted and reshaped.

The pyramid of polymers 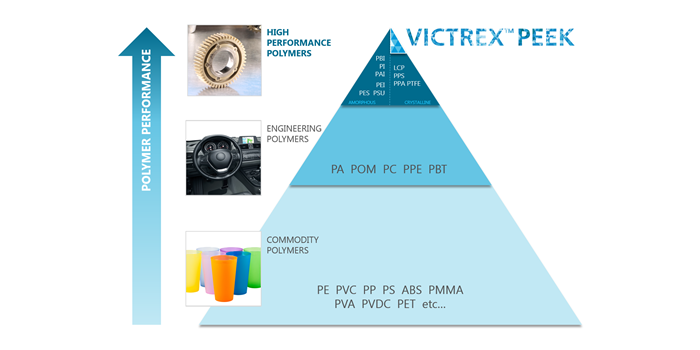 One of the easiest ways to understand this complex topic is to view polymers as a pyramid. This identifies three major categories of polymers:

Commodity polymers such as polypropylene (PP) and polyethylene (PE) are at the base of the pyramid. They are readily available in large quantities and have a reasonable performance for the applications in which they are used. PE, for example, is commonly used to make high-volume items such as plastic bags and packaging materials, applications where high temperature or extreme strength is not a critical factor.

Polyvinyl chloride (PVC), meanwhile, is for example widely used in the construction industry and comes in two forms, rigid and flexible, with the rigid version used in window frames, guttering and piping and the flexible version commonly used for the insulation of electrical cabling. The raw materials for commodity polymers are usually obtained from oil and petrochemical derivatives, and typically they are inexpensive to produce. The main raw material for PVC however is salt.

In contrast, engineering plastics are a distinct step up from commodity polymers and offer a superior range of properties, particularly in mechanical and thermal performance – but with superior performance comes a higher price. For example, the polyamide family (Nylons) has a wide range of applications, from textiles for clothing to food and beverage containers, and in engineering applications like domestic appliances and automotive components.

High-performance polymers represent about 700,000 tonnes or only 0.2% of all man-made polymers

High-performance polymers are located at the top of the polymer pyramid and represent about 700,000 tonnes or only 0.2% of all man-made polymers. They are typically much more difficult to produce and based on more complex monomers and are generally more expensive as a result. However, as the difficulty of producing the polymer increases, so does the performance of the resultant polymer.

PolyEtherEtherKetone (PEEK) belongs to these high-performance polymers and is a member of the PAEK (Poly Aryl Ether Ketones) family of polymers, a family with over 300 members but only a handful of which have been commercialised. The linear aromatic PEEK polymer consists of repeating ether, ether and ketone linkages separated by aryl groups. It is this many (or Poly) EtherEtherKetone arrangement which gives the polymer its name PEEK and its unique performance.

Why high performance can matter

Polyetheretherketones such as VICTREX™ PEEK are ideally suited to extreme and demanding environments. While alternative materials can meet specific needs, PEEK can support multiple requirements. For example the light weight, high strength PEEK polymer provides high resistance to wear, temperature, fatigue and aggressive fluids/chemicals and can contribute to

>1 billion mobile devices use our solutions, for example in high-performance speakers

To mention just a few examples: Already over 200 million automobile drivers are relying on innovative Victrex PEEK-based ABS/ESC brake components today; more than 15,000 aircraft have Victrex solutions on board such as brackets, clamps or thermal acoustic insulation; and more than one billion mobile devices use our solutions, for example in high-performance speakers. PEEK is even used inside the human body: in the quest for improved patient care PEEK as a biomaterial has little more than 15 years of history, yet already around nine million implanted devices worldwide use PEEK-OPTIMA™ polymers from Invibio, a Victrex plc company – an impressive statistic.

Advanced PEEK materials, production processes and integrated offerings are opening the door to increased efficiency and new potential uses – uses for which the ancient Greeks who pioneered the sciences would have been justifiably proud.

Araldite® is a registered trademark of Huntsman Advanced Materials